Are They Harmful to Humans?

Although cicada killers look terrifying and are a threat to cicada bugs and sometimes other cicada killer wasps, they are usually harmless to people. 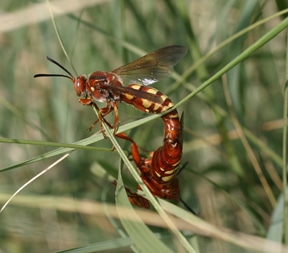 If you see an insect resembling a huge bee attacking a cicada, then you’ve most likely seen a cicada killer wasp. The wasp resembles a very large yellow jacket; its body is black with pale yellow stripes running across its abdomen.

Its antenna and wings have a yellow tint. A male cicada killer dies a short moment after mating while a female will die once she has laid all her eggs. You are most likely to see cicada killers in early summer months.

Cicada killers tend to burrow in areas surrounding forests, waste placed as well as gardens. They build their in places with adequate light, proper drainage, and light soil, especially close to trees where cicadas are mostly found.

The pests appear in summer when weather conditions are favorable for mating. After mating, a female cicada killer burrows oval-shaped chambers in the soil where she lays her eggs. She will then look for cicada bugs on which she will lay her eggs, each egg per bug.

When a female cicada killer finds a cicada, she stings and paralyzes it before taking it to the chambers that she had borrowed.  Upon reaching the chamber, she places it somewhere inside it and lays an egg on the cicada bug and then goes outside again to look for another cicada bug. She will do this until she finds enough cicada bugs for hosting all her eggs.

When a cicada killer egg hatches into larvae, the young cicada killer eats the cicada bug as it takes care to help it survive. Upon feeding to its fill, the larva forms a cocoon in the chamber and hibernates there until when spring comes. Upon the arrival of spring, the larva starts to make its way out of the tunnel as an adult wasp. 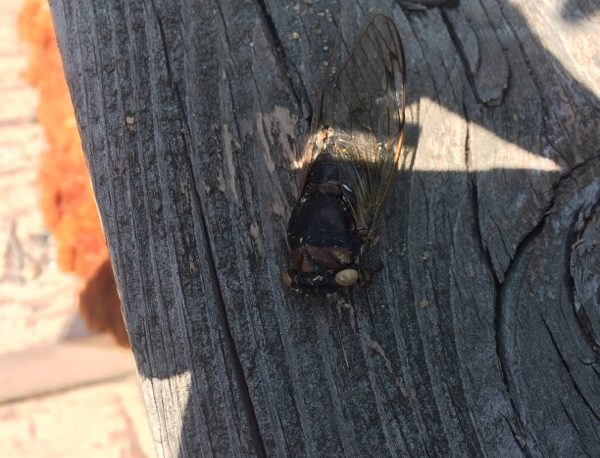 Are Cicada Killers Harmful to People?

Although cicada killers look terrifying and are a threat to cicada bugs and sometimes other cicada killer wasps, they are usually harmless to people.  Nevertheless, a cicada killer may not have the patience spare you its stinging wrath if you happen to squeeze it in your hands, step on it or annoy it.

It is a female cicada killer that stings since a male doesn’t have a stinger. However, you should always play safe since you might not be in a position to establish if you are dealing with a male or a female. Avoid doing these to the insect and rest assured that it won’t harm you in any way. Besides, keep off from places with these insects lest they feel provoked and sting you.

Although they are usually harmless to humans, cicada killers, especially the females are a nuisance when they invade an area near or inside your building since the tunnels they borrow can cause damage to your property.

“It is a female cicada killer that stings since a male doesn’t have a stinger. However, you should always play safe since you might not be in a position to establish if you are dealing with a male or a female.”

As mentioned earlier, cicada killers are attracted to places with conditions that favor their survival and breeding. The conditions include proper drainage, sunlight, ample cicada bugs as well as dirt.

Therefore, the best way to keep the bug killers from coming to your place is to eliminate these conditions. Once they are absent, cicada killers will find no to reason to go there.

Since cicada killers can sting when provoked, it is advisable to handle their elimination with utmost care and professionalism. Don’t worry if you don’t have the proper knowledge and skills needed to eradicate the bugs safely; a pest extermination expert from Control Exterminating can do it for you.

Get in touch with Control Exterminating for the best solution to a cicada killer problem in your property.***