Somehow spider beetles have taken root in New York City. You may not even realize since most often they are mistaken for spiders or bed bugs. It’s an easy mistake to make due to their large round bodies and spider-like structures.

Belonging to the family Ptinidae, several kinds of spider beetle species exist. Most of them are found in food storage places like pantries and kitchen cabinets.

However, it is important to recognize them before they cause damage which you may not be prepared for. So, the next time you see something that appears to be a spider, make sure it’s not really a spider beetle. 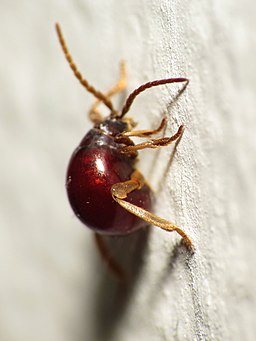 Spider Beetle by Katja Schulz [CC BY 2.0], via Wikimedia Commons

What Do Spider Beetles Eat?

Spider beetles eat almost anything and everything. In some ways, they are more like rats in that their eating habits include wool, food products, hairs, animal droppings, natural fabric, synthetic fabric, etc.

Spider beetles are scavengers, and their eating habits can be damaging if they infest your home or business.

How Do Spider Beetles Infest?

Spider beetles are capable of reproducing on literally everything. They frequently inhabit places where there is woodwork, paper or fabrics as these happen to be among their favorite places to infest.

Despite their resemblance to bed bugs and spiders, spider beetles are not harmful to humans. In case of an infestation they’ll take over your pantry, and then you may find them in your spices, grains, cereals, dried fruits or upholstered furniture. Their nests are difficult to locate because though they usually are within walls or in dark corners of attics.

Peak breeding season for spider beetles is in late spring or summer. If the climate is favorable they can produce almost two generations in one year. A single female spider beetle can lay around 120 eggs in the span of just one month. The life cycle of a spider beetle is broken down into 4 stages:

You will find these to have a dark reddish brown shade or completely black colored body. The average length of these spider beetles is around 1.5 to 3.5 mm.

American spider beetles possess a head, thorax, legs, and antennae which are most of the times covered with cream or yellow-colored hairs. Smooth spider beetles, on the other hand, have a smooth, single-colored, shiny black body, and that’s why they’re sometimes mistaken for mites.

As the name refers, these beetles have patches of white-colored hairs all across the wings while the rest of their body is light-brown in color. As these beetles get older, their hairs lose their white color. The average body size of these spider beetles ranges from 2 – 4.3 mm. 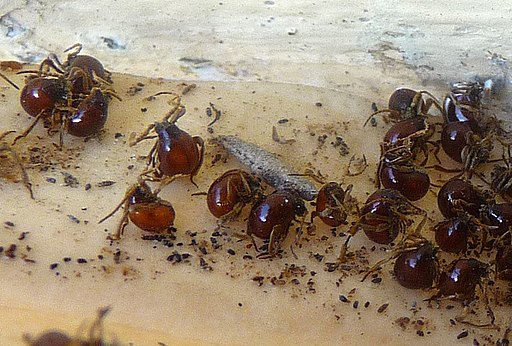 Spider Beetles by gailhampshire from Cradley, Malvern, U.K [CC BY 2.0], via Wikimedia Commons

How to Get Rid of Spider Beetles

In case of a spider beetle infestation, make sure to keep your food in airtight containers to avoid contamination. Also, dump away all food that is expired or rotten. Spider beetles can live on either fresh or rotten food.

It is very important to keep your house clean if you want to get rid of spider beetles from your house.

Regularly and thoroughly clean the areas where food is handled. This will help discourage them from invading your house, and they’ll move out to find a more suitable habitat. Fill all the cracks and crevices you have in your home to remove their entry points.

However, it is always beneficial to get help from professionals as they are fully equipped to get through these situations and get rid of beetles from your house or business for good.***