Termites are one of the most destructive pests you can encounter. Understanding the life cycle of termites will inform you as to why they are so troublesome.

Termites are dangerous wood-eating pests, and their infestation is a real threat to wooden foundations. Their ability to eat away the entire structure of a house or building is a testament to how destructive they are.

It is estimated that termites cause property damage of $5 Billion every year!

These decomposers have been munching on wood for centuries with more than 2500 termite species in existence. Each has unique characteristics, appearance, behavior, and habitat. But despite their distinct features, the life cycle of termites is similar in all species.

The life cycle of termites starts when swarming winged reproductive males, and females make a mating flight. They leave the established colonies in large groups.

Female swarmers then release perfume like ‘mating pheromone’ chemicals. This lures the male swarmers, and once they find an attractive female, they shed their wings together. Shedding wings is an indication they are a couple now, and then they procreate.

They land in a new place to establish a new colony there. They finish mating there and then fertilize the female termite. Those respective male and female termites will become the king and queen of the newly established colony.

The fertilized queen lays eggs that eventually hatch into larvae which are pale-white in color.

Once the larvae hatch out of their eggs, they start molting. Molting is a growth process for termites in which they shed their exoskeletons to develop into worker and soldier termites. The termite which is going through the molting process is known as a nymph.

Initially, a soft exoskeleton is developed under the existing hard exoskeleton. Once they reach maturity, the outer skeleton splits, and the inner skeleton hardens.

Eggs hatch into larvae after 30 days. The termite king is responsible for feeding the immature termites. Larvae will molt several times over time.

Environmental factors and pheromone cues by the king and queen determine which caste larvae will assume after growing. The termites’ castes which larvae can develop into include workers, soldiers, and alates (reproductive termites). 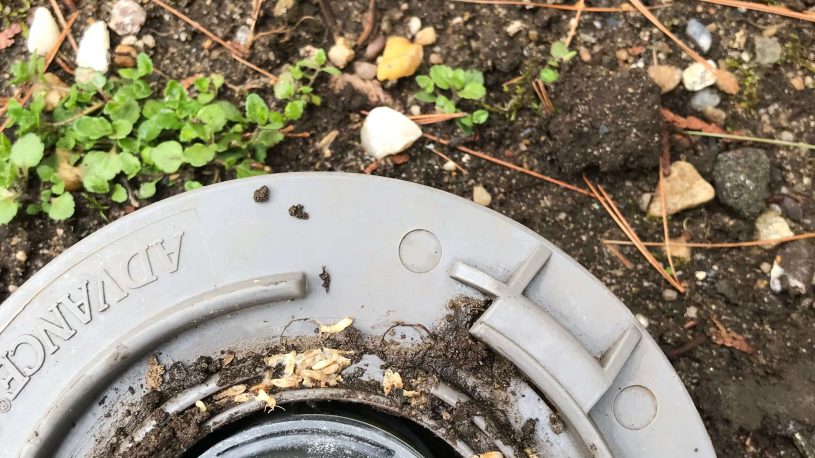 Termites in a trap

Molting is required to achieve maturity, and enter the caste system of termites. Usually, larvae molt up to 3 times to reach full maturity. Afterward, larvae pick up castes and develop structures according to their caste. There are three possible castes larvae can be placed in to. Each has specific functions to perform for the survival of the colony.

Workers are an essential component of any termite colony. Their roles include:

Most of the termites that you’ll see eating are generally are worker termites. They are sterile and don’t grow any further. Also, they are blind, lack wings, and have a lifespan of 1 – 2 years.

These termites are yellow-brown. They have large mandibles and enlarged red heads. Their primary purpose is to defend the colonies from any intruders. Even though they are warriors, they are unable to eat on their own.

Soldiers are dependent on workers to feed them. Just like the worker stage, the soldier stage is as far as soldiers will go in the caste system. They are also sterile and don’t live longer than 2 years.

Reproductive termites are dark in color and possess functioning eyes with two pairs of wings which aid them during their mating flight. Those larvae who assume the role of reproductive alates (kings and queens) leave their colony during colonizing flight. They search for a suitable site for nesting, mate there, reproduce, and then become the king and queen of their colonies.

Termite Queens have a long lifespan and can live up to decades in favorable climate conditions.

In the life cycle of termites, there is no hard and fast rule for assuming the respective caste role. If the colony demands it, termites from one caste can develop into another caste. For example; a worker termite can become a soldier or alate if required. 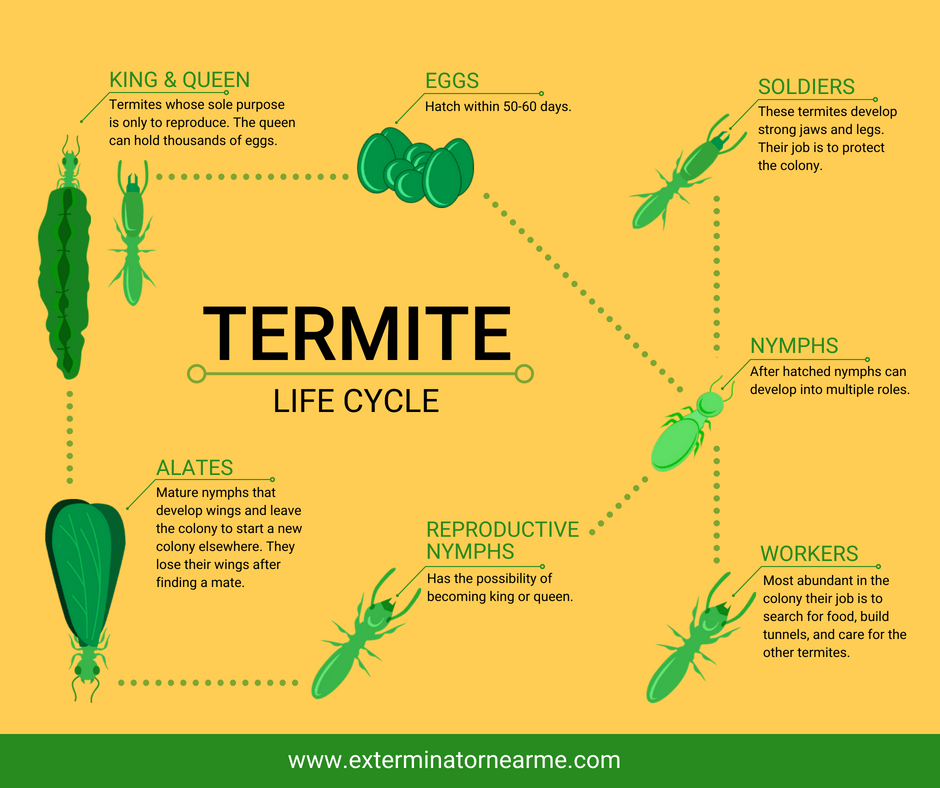